I have been anxiously awaiting the arrival of Verizon’s first 4G LTE smartphone, the HTC Thunderbolt.  If it boasts the same Rx/Tx speeds that I am getting with my LG 4G USB modem, I will be very pleased.  After the usual delays, the HTC Thunderbolt is due to hit Verizon stores any day now.  Curiously, I see that Apple is planning to offer a new proprietary peripheral connection interface on its devices which will compete with USB 3.0.  Also dubbed Thunderbolt, the new interface was developed by Intel and it should be appearing on Apple MacBook laptops soon. 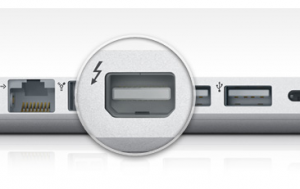 While smartphones and computer peripheral interfaces are not identical goods, I would not want to be the party with inferior registration rights in that trademark battle, particularly if Apple, which protects its marks aggressively, finds itself in a corner.

There is one interesting quirk here, with respect to the HTC Thunderbolt: in the past, HTC has, as far as I can tell, always filed U.S. trademark applications for the phones it develops (Incredible, EVO, Incredible S, etc.). But in this case, Verizon was the party which filed an intent-to-use application for THUNDERBOLT. This may simply be the result of an agreement between Verizon and HTC whereby Verizon will be the only carrier to sell an HTC phone bearing the THUNDERBOLT mark and consequently the trademark registration responsibilities were handed off to them. Ultimately, whomever owns the mark (presumably Verizon) will grant a license to the other to use it as well.

Verizon’s application Ser. No. 85188944 for THUNDERBOLT was filed with the Trademark Office on December 2, 2010.  I can find no U.S. applications for THUNDERBOLT by Apple or Intel, although Apple has a history of being coy about its mark registrations, so it may have something in the works.