My wife Kelleigh is currently associate producing a film called 25 Hill  that is being made right here in Northeast Ohio.  The film, written and directed by Corbin Bernsen, tells the story of a boy who wants to compete in the All American Soap Box Derby, an event which has been held in Akron, Ohio since 1935.  In both the film and in the real world, the Derby may be forced to shut down due to waning interest and financial troubles.  I won’t spoil the story, but suffice to say that it delivers a good message that I think is appropriate for these troubled times.

In the soap box derby world, competitors paint their cars, often with a name or logo on the side.  Shortly before the filming of 25 Hill began last month, my wife mentioned that the protagonist’s car was to be adorned with the patriotic phrase “Spirit of America” on the side.  The title was familiar, so naturally I began to wonder about IP issues.  While the name is obviously reminiscent of the “Spirit of St. Louis,” the single engine plane that Charles Lindberg flew nonstop from New York to Paris, it seemed to ring some other bells as well.  I dug around on the Internet and found some more examples.  Goodyear (also located here in Akron) has a blimp named the Spirit of America, which didn’t really trouble me, but I found another reference that did:  Craig Breedlove, who has spent more than forty years setting land speed records in the Bonneville Salt Flats, has named all of his jet cars Spirit of America. 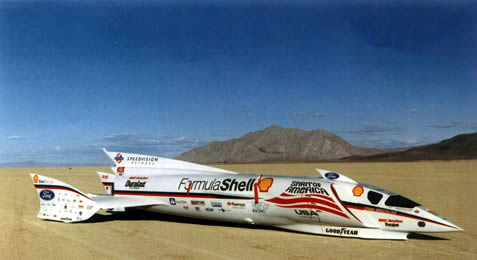 One of Breedlove’s Spirit of America jet cars

The Wikipedia article (read: dubious) that describes Breedlove’s cars suggests that “Spirit of America” is “the trademarked name used by Craig Breedlove for his land speed record-setting vehicles.”  I performed a quick federal trademark search for the phrase, but I could not locate any particularly relevant federal trademark registrations for SPIRIT OF AMERICA or the like which overlap with 25 Hill’s intended use of the term for a soap box car in a motion picture.

In the big picture, SPIRIT OF AMERICA might be regarded as a descriptive mark of sorts for anything patriotically American, especially in the vein of technologically superior vehicles like planes, airships, and cars, and one could make the argument that anyone who uses the mark in this context does so in a crowded field and is thus entitled to weak protection at best.  Nevertheless, it just seemed like a bad idea to contaminate the film with a potential trademark issue, so I talked it over with my wife, who in turn mentioned it to Corbin.  To my surprise, Corbin asked if I would come down to the production office to offer my thoughts.  After explaining my views and relaying a story about a similar case that my former firm handled successfully on behalf of a trademark owner-client a few years ago, everyone agreed that it was in the best interest of the film to choose a new name.  Some brainstorming followed, a new name was chosen, and I watched with fascination as Corbin and Kelleigh hand-edited the script so that the new name would fit the existing storyline.  Since the soap box car in question will be featured prominently in the film, I will be able to see my small contribution to film history on the big screen, which, I have to say, is pretty great!

Kelleigh and the newly dubbed “Faith and Courage” on the set of the film 25 Hill. Photo courtesy of Jim Biss