When I registered the domain name cyberlexical.com, I also created a Twitter Account with the handle “cyberlexical,” thinking that I might eventually generate a Twitter feed pointing back to my posts and to other relevant Web content.  I’m certain that a lot of people do this with the same motives in mind, and — as it turns out — it might not be a bad idea.

One blogger recently posted an account of his own experience, suggesting that web crawler bots are monitoring new domain name registrations and acquiring like-named Twitter handles, ostensibly to squat on those handles and monetize them.  Locating new domain name registrations is not particularly difficult, considering the number of websites available online that catalog new registrations almost as they happen.  I saw evidence of this shortly after I registered cyberlexical.com, when I began performing Google searches for “cyberlexical” to monitor its appearance in Google’s search results. Initially, a link to this blog did not appear among the search results, but there were a multitude of results pointing to services cataloging my new registration among a list of other domain names registered during the same time period.  Those bots are efficient: 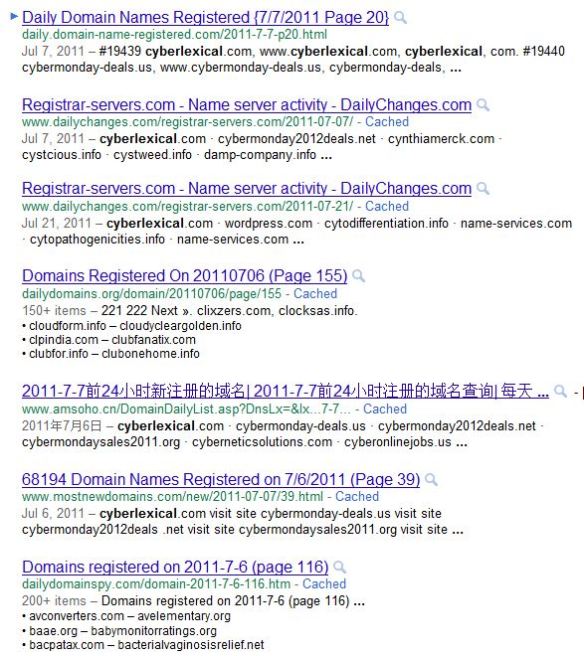 In any case, I soon set up the privacy feature, for which there was no additional charge — although many domain registrars do charge for this.  Come to think of it, that makes me wonder: do domain registrars that offer privacy services for a fee also farm out your public contact information to their partners in the SEO business, compelling you to either accept their privacy service (for a fee), or submit to being pestered by SEO marketers who are attempting to get you to use their services (for a fee)?

There is certainly potential value in acquiring Twitter names that are synonymous with new domain name registrations.  In a Web environment that is characterized by the significance of attractive user names, domain names, email addresses, and other identifiers, the land rush effect compels content owners to gobble up those identifiers — as much out of fear that they will be hijacked by opportunistic squatters as from the desire to put them to legitimate use.  In regard to Twitter, we have already seen some cases of name-squatting appear in the media, lodged by celebrities (well, pseudo-celebrities) and big companies (fine, pseudo-big companies) seeking to gain control or restrict the use of their names as Twitter handles.  Such cases face difficult uphill battles before tribunals, because they fall outside the scope of legal frameworks like the ACPA and the UDRP, which apply only to second level domain names (e.g., example.com), not third level domain names or resource paths (e.g. domain.com/example).  Twitter accounts, which are expressed as http://www.twitter.com/username, clearly fall into the latter category.

Without the assistance of such targeted legislation, aggrieved content owners who are also U.S. trademark owners appear to have little remaining recourse against name-squatters, unless and until such names are used commercially in the manner anticipated by the Lanham Act.  Even then, trademark owners would also have to prove a likelihood of confusion to succeed on a claim of trademark infringement.  Claims of dilution or tarnishment are probably even further out of reach, except to those plaintiffs’ whose marks are among the über-famous — the only marks that are protected under the dilution provisions of the Act.

This leaves trademark owners mostly at the mercy of Twitter itself, which provides a set of factors that it considers in determining whether conduct constitutes unfair name-squatting:

While these factors echo some of the requirements of U.S. trademark and anti-cybersquatting legislation, they are also comfortably subjective, giving Twitter a great deal of flexibility in reaching determinations about cybersquatting complaints — typical of the protective manner in which company policies are usually written.

Bringing the discussion full circle, it appears that we have: (1) highly-efficient web bots that automatically track new domain name registrations and then register identical Twitter handles; (2) flabbergasted domain name owners, who find little help in the existing legal frameworks; and (3) a somewhat subjective set of policies provided by Twitter itself to deal with name-squatting disputes.  In effect, it appears that it is very easy to lose the opportunity to use a Twitter handle identical to your domain name unless you acquire it quickly, and much harder to get it back if you do not, as the writer of the aforementioned article discovered.

Most marketing specialists will likely respond to this seeming-conundrum monosyllabically: “duh.”

Conventional marketing wisdom is to create a concept, prepare it for prime time, and quietly acquire any and all related virtual property on the front end — a Twitter account, a Facebook page, etc. — even if you do not intend to ultimately use them.

But all of this feels more than a little out of sync with U.S. trademark law, which is designed to avoid land rushes by providing a sort of limited monopoly over the use of words and symbols to those who actually use them (BIG emphasis on “use”), in association with products or services.  You cannot register a trademark for a word that you might use; you have to demonstrate that you are genuinely using it in association with your products/service, or that you have at least a bona fide intent to use it soon, not merely an inkling that it might be valuable and a desire to reserve it.  In the Web-verse, the approach is the opposite: when a user conceives a new name or phrase that s/he wishes to use as a tool for branding, the user is also compelled to scour the Internet for other unreserved instances of the term, lest s/he be beaten to the punch by clever opportunists.

So why the disparate nature of the Web vs. the “real” world with respect to the use of trademarks? Aside from the consummate reality that the law is sluggish when it comes to  catching up with the rapid evolution of technology, the central difference is the immediacy of the Internet itself.  This is not your father’s marble and granite Patent and Trademark Office: the Internet happens in an instant.  In an analgous comment concerning copyright, one of my favorite quotations reads:

Notions of security and control that may have been exercisable in the non-networked, analog world cannot be effectively transferred to a realm where even a single digital copy can propagate millions of perfect clones, world-wide, almost instantaneously, and where control over the quantity and destiny of the bits that comprise digital media will be imperfect at best.1

The quandary is the same in the name game: it happens quickly and without an effective administrative filter on the front end, so for now (and perhaps for the foreseeable future) it must be policed largely on the back end. The law is imperfect and it requires those who embrace new technology to anticipate and outmaneuver opportunists who seek to monopolize that technology.  Eventually, the legislature may draft new laws that better harmonize our existing legal frameworks with the dynamic nature of the Internet, but the Internet is a rapidly moving target, and new legislation and the accompanying litigation that it generates are costly.  In the meantime, the bots are watching.