I gave a presentation today at the University of Akron School of Law entitled The Record Industry & Digital Music Price Fixing: Starr v. Sony BMG Music Entm’t, 592 F.3d 314 (2d Cir. 2010), cert. denied, 131 S. Ct. 901 (U.S. 2011).  With respect to the cited case, the U.S. Supreme Court decided by not deciding — that is to say that, the class action victory in the Second Circuit was left undisturbed by the Supreme Court.

The gist of the suit was grounded in the class action plaintiffs’ assertion that during the early days of digital music downloads — prior to the $0.99 iTunes era — the defendant record companies conspired to keep downloadable music prices artificially high so that its established revenue stream generated through CD sales would continue uninterrupted. 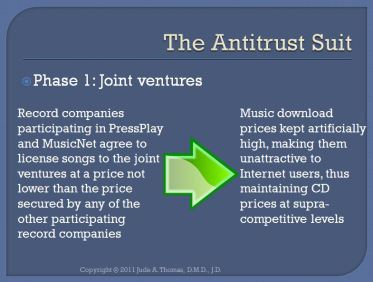 The Supreme Court’s decision was a bit of a coup for the plaintiffs, because at the district court level, the judge found no compelling evidence of parallel conduct by the Defendant music companies that would suggest antitrust behavior.  In contrast, the Court of Appeals identified at least seven non-conclusory factual allegations suggesting that there was indeed quite a bit of parallel conduct by the Defendants.  The district court and the appellate court could not have been much further apart, and the Supreme Court effectively sided with the latter.

In the grander scheme, I find the case to be especially interesting because it fits well into a discussion about the difficulties that corporate entities and the law itself experience when they attempt to play catch up with new digital technology, a theme that I return to frequently in my writing.  In this case, the music industry was overwhelmed by the emergence of file sharing, particularly during the Napster era, and both industry and the law were initially ill-equipped to manage a technology that simultaneously held so much promise and so much threat for the music industry.  It has been argued that the music industry made some poor decisions at the outset and has invested heavily in supporting those decisions ever since.

It will be interesting to see what the district court decides upon remand, now that the Supreme Court has declined to grant cert to the record companies.  The case has a bit of a Shakespearean quality of the “something is rotten” variety, when you consider that the district court’s ruling was almost diametrically opposed to the Second Circuit’s subsequent decision with respect to the evidence of parallelism.  This alone wouldn’t be particularly bothersome, if not for the district court judge’s admission that she has a potential conflict of interest: her husband represents several of the largest record companies.  And yes, she declined to recuse herself.

Once the case shakes out, I hope to convert my PowerPoint slides and research into a new article.  Stay tuned.